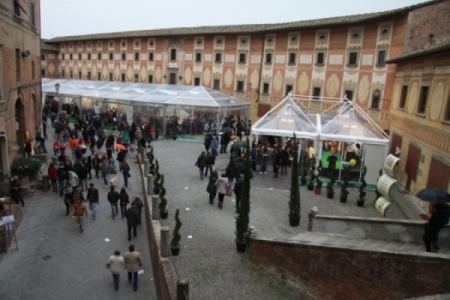 Tuscany is one of the most famous regions in Europe and has one of the richest histories. San Miniato, the XX mile City, has always been a part of this history. It is located along the Via Francigena that connected northern Canterbury to Rome during the Middle Ages and it was travelled by an uninterrupted flow of men, armies, trade, ideas and culture. Situated along this route in the heart of the Arno River Valley, San Miniato was at the intersection of the roads between Florence and Pisa, Lucca and Siena. Pistoia, San Gimignano, Volterra and Vinci also lay within these twenty miles. It is not surprising, therefore, that San Miniato was a favoured city of emperors like Fredrick II of Swabia and Popes such as Gregory V and Eugene IV. In 1533, for example, as Michelangelo wrote in one of his manuscripts, he met with Pope Clement VII in San Miniato where the pontiff commissioned him to paint the Sistine Chapel. A few years later, Michel de Montaigne stopped there and recorded the visit in his work “Travel to Italy”. It may be that another great traveller, Wolfgang Goethe, whose journey between Florence and Siena was documented, stopped to visit San Miniato al Tedesco, the Rocca, the castle of his fellow countryman Frederick II and the sixteenth-century Accademia degli Affidati. The entire history of Tuscany, from the Etruscans to the Grand Duchy of Hapsburg-Lorraine, found a meeting point in San Miniato, do you want be part of this history, so come visit us.

Join Our Weekend Package for the Truffle Festival of San Miniato ( All weekends of November 2016):

Not Included:  Everything not written under “Included”.

This website uses cookies to improve your experience while you navigate through the website. Out of these, the cookies that are categorized as necessary are stored on your browser as they are essential for the working of basic functionalities of the website. We also use third-party cookies that help us analyze and understand how you use this website. These cookies will be stored in your browser only with your consent. You also have the option to opt-out of these cookies. But opting out of some of these cookies may affect your browsing experience.
Necessary Always Enabled

Any cookies that may not be particularly necessary for the website to function and is used specifically to collect user personal data via analytics, ads, other embedded contents are termed as non-necessary cookies. It is mandatory to procure user consent prior to running these cookies on your website.